WEEK OF MAY 4th: STAR SPANGLED BANNER - OUR NATIONAL ANTHEM

Why are most of the lyrics of the Star Spangled Banner framed as questions? The answer lies in the story behind the Star Spangled Banner, which was written in 1814 by Francis Scott Key. Key allows us to relive a crucial battle between the United States and Britain through his eyes. His poem, which later became the lyrics of our national anthem, asks whether the US flag at Ft. McHenry in Baltimore will fall or surrender to the British during the War of 1812.

This weekʼs lesson is about giving meaning to the words of our anthem, which we hear and sing all the time at sports events. In the videos below youʼll visit Ft. McHenry and see the "ramparts" that Key writes about. Then challenge yourself to learn how to sign the Star Spangled Banner as you sing along. Iʼve included the lyrics sung by Juneauʼs own Anna Graceman, and what is considered one of the best performances of our national anthem sung by Whitney Houston.

Remember national means "country" and anthem means " a song that is identified by a group of people or cause." Most countries have a national anthem. Research a country that youʼre interested in. How does its national anthem differ from ours in sound and lyrics?
WEEK OF APRIL 27TH: AXIS OF AWESOME CHORDS
Last week we learned that many folks songs are made up of three chords: I, IV, and V chords. This week we take it a step further and learn that by adding just one more chord, you have access to hundreds of popular songs, which use this chord sequence: I, V, vi IV. Have fun playing along with the Axis of Awesome (clean version) who shows you just how many pop songs follow this sequence. First watch the tutorial to learn how to play along using Virtual Guitar Online and then dive in! Mix the chords up into a different sequence and start composing your own music. Click here for more resources, including mash-ups, song banks, and beatboxing!
WEEK OF APRIL 20th: CELEBRATING EARTH DAY
This week we are celebrating Earth Day on April 22nd, a day that should be celebrated every day! Join me in singing, "This Land is Your Land." You can find the lyrics here. Before joining in on the sing-along, check out this tutorial on Virtual Guitar Online to that you can accompany me on guitar. Itʼs easy to learn and can open the door to composing your own pieces of music. Checkout the additional videos on What a Wonderful World, Our Planet, and Chasing Coral - all songs about preserving our beautiful Earth. 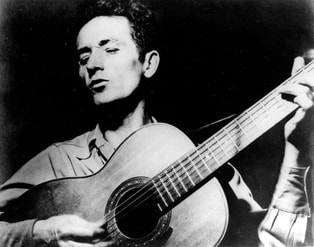 Woody was very curious and a keen observer of the world around him. He loved to draw and paint. During his childhood in Oklahoma, Woody experienced great loss: his older sister Clara died accidentally, his mother was put in an institution, and his family was financially ruined. Yet Woody is considered one of the most significant American singer-songwriters of folk music. He wrote hundreds of songs including country, folk, and, ballads, childrenʼs songs and improvised works. This Land is Your Land is one his most recognized songs and a Glacier Valley favorite.
WEEK OF APRIL 12th: Major Scale and Folk Song Structure
Weʼll celebrate Alaska Folk Festival by singing a folk song and form our own band by playing instruments from home.
WEEK OF APRIL 5th:  Making Instruments at Home
This week's lesson focuses on the Science of Music or the Science of Sound. In particular, we will explore the music element of Pitch: how high or low a musical sound is. Gather some empty bottles and water to create your own pitches and composition. Thank you, Lindsay Clark, for sharing this with me. You can also play along with the Grascals' Boil Them Cabbage Down performance video by improvising on your newly created instrument, JAMM stringed instrument, sing along, or use body percussion and other found instruments to add to the band.
WEEK OF MARCH 16th: Irish Music and the Jig:
This week we will focus on the Irish jig, which is a popular and traditional dance form sung and danced in 6/8 meter, a compound meter, which means the each beat divides into three parts. The most common structure of a jig is two eight-bar parts, performing two different steps, each once on the right foot, and one on the left foot. Try your hand at dancing a jig, playing a jig, listening to a jig or playing along with a jig.
Listen to Irish Music: These links introduce you to traditional Irish instruments; the famous Irish band, the Chieftains; and a fiddle lesson for JAMM students who would like to try their hand at learning by ear and watching his fingering. There is so much great Irish music out there so this h